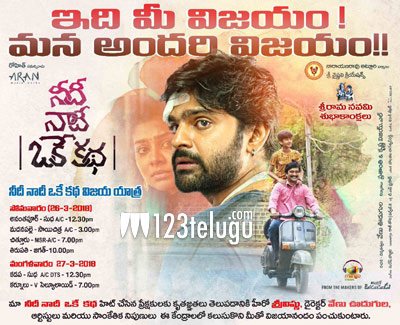 Needi Naadi Oke Katha released on Friday and is running successfully with a positive word of mouth. Hero Sree Vishnu and Devi Prasad’s intense performances and the film’s important social message have been received well by the audience.

Starting tomorrow, Needi Naadi Oke Katha’s team will be going on a success tour to interact with movie lovers and thank them for making the film a success. The tour will begin in Rayalaseema and will continue in other parts of the twin Telugu states. Sree Vishnu, the film’s director Venu Udugula and other cast and crew members will take part in the success tour.

Prashanthi and Krishna Vijay have produced the movie, while hero Nara Rohith has presented it under Aran Media Works banner. Satna Titus is the leading lady in the movie.