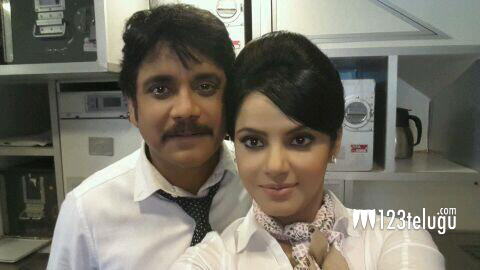 ANR, Nagarjuna and Naga Chaitanya starrer Manam is gearing up for a huge release on March 31. Directed by Vikram Kumar, the film is being produced by Nagarjuna under Annapurna Studios banner. Apart from the three lead actors from the Akkineni family, the film also stars Shriya Saran and Samantha in lead roles.

After revealing the first poster of the film, no other details about the film or the characterizations of the lead actors has been revealed so far. In fact, the makers have been tight lipped about the film since its inception, apart from saying that it’ll be a unique experience, because of the storyline. Now, we have learnt that Neetu Chandra has done a cameo in the film. Details about her role are still under the wraps, but the actress acknowledged her presence in the film through her Twitter profile. “#Manam – much awaited #Telgumovie of d year.Loved working vd#Nagarjuna Sir n #Chaitanya.Thanks 2 d Dir. Vikram kumar,” she posted on Twitter.

Anup Rubens is scoring the music for the film. Since ‘Manam’ is the last film late ANR garu had acted in, Nagarjuna has urged movie lovers to let the film be a befitting finale for the legend. More details about the film are expected to be revealed soon.