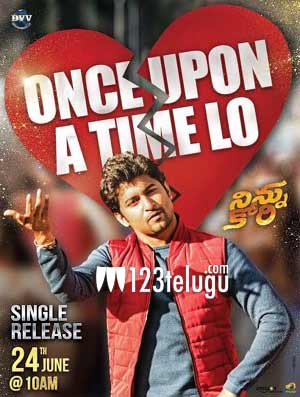 Adiga Adiga and Unnattundi Gunde, the two successful songs of Nani’s upcoming romantic drama Ninnu Kori, enthralled music lovers and created a good buzz for the movie. Now, the film’s third single ‘Once Upon A Time Lo’ will be out on June 24.

Even the recently released theatrical trailer has been received quite well and clocked over 10 million digital views. This intense love triangle also stars Aadhi Pinisetty and Nivetha Thomas. Gopi Sundar has composed a soulful soundtrack for the film.

Debutant Shiva Nirvana has directed this movie and DVV Danayya has produced it. Ninnu Kori is slated to hit the screens on July 7.