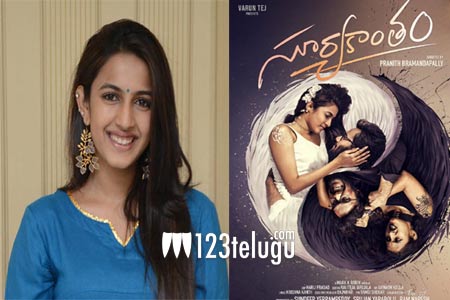 Yesterday, the makers of niharika konidela and young hero Rahul Vijay’s upcoming romantic comedy, Suryakantham, unveiled the film’s first look poster. The poster showcased the crazy chemistry between Niharika and Rahul in a YinhYang set up.

In an latest interview with a popular English daily, Niharika described her character in Suryakantham as a loud, outgoing and funny character. She further revealed that the film shows how people with contrasting personalities and different takes on relationships fall for each other. “This film will show how a girl can be an angel and a nightmare at the same time. Love her, she will be an angel but hurt her and she will be your nightmare,” said Niharika.

Suryakantham is being directed by debutant Praneeth. Noted US distribution house Nirvana Cinemas is producing the film.