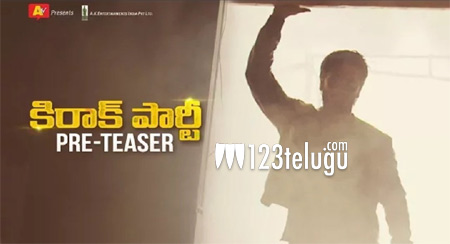 Actor Nikhil is finally gearing up to promote his forthcoming film Kiraak Party. Directed by Sharan Koppisetty, the film is being produced by Anil Sunkara under AK Entertainment banner.

The film is the official remake of a blockbuster Kannada film Kirrik Party, and it’ll star Nikhil as a college-goer. Samyukta Hegde and Simran Pareejna are the lead actresses in this youthful entertainer.

Nilhil, who was shooting in the US for the past few days, is going to promote the film along with the rest of the cast. A pre-teaser was unveiled today, and the team is going to launch the first song on January 22. Ajaneesh Lokanath has scored the music and the film will hit the screens on February 9.