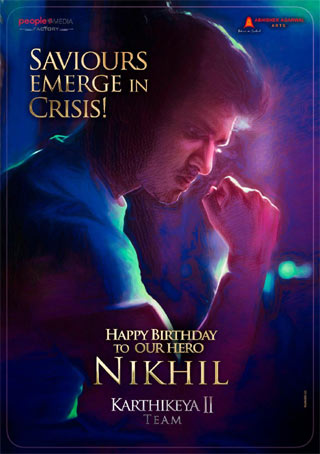 Hero Nikhil is celebrating his birthday today. On this special occasion, the makers of his ongoing supernatural fantasy thriller, Karthikeya 2, unveiled the film’s first look poster. In the poster, Nikhil looks intense in a pensive mood and the caption ‘Saviours emerge in crisis’ hints that the actor will be playing the role of a saviour in the movie.

Karthikeya 2 has young Malayalam actress Anupama Parameswaran as the female lead. The film is being directed by Chandoo Mondeti, who earlier directed Nikhil-Swathi’s hit supernatural thriller, Karthikeya. However, Karthikeya 2 is neither a sequel nor an extension to Karthikeya. People Media Factory and Abhishek Agarwal Arts banners are jointly bankrolling the project.