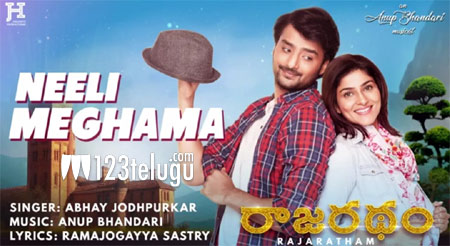 The makers of the upcoming Telugu-Kannada bilingual romantic entertainer, Rajaratham, (Rajaratha in Kannada), have been creating a lot of buzz with their promotions.

After roping in Rana Daggubati to give a voice-over for the movie and also unveil the film’s trailer and later bringing on Vijay Deverakonda to launch the film’s first single ‘College Days’, they have now got hero Nikhil to release the second single ‘Neeli Meghama’.

Nikhil took to Twitter and unveiled the cool and melodious number ‘Neeli Meghama’ yesterday. The song is beautifully sung by Abhay Jodhpurkar and penned by popular lyricist Ramajogayya Sastry. The film’s director Anup Bhandari himself has composed the music.

Rajaratham’s both the versions are slated to hit the screens on February 16. The film stars Nirup Bhandari and Avantika Shetty as the main leads, while Tamil hero Arya is essaying a crucial role. Ajay Reddy, Vishu Dakappagari, Anju Vallabhaneni and Sathish Sastry are producing the movie.