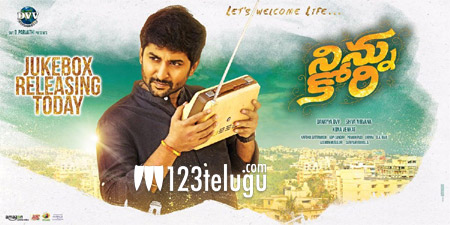 Nani’s forthcoming film Ninnu Kori is scheduled for a July 7th release. The film’s theatrical trailer and two songs from the audio album are already out and are getting positive feedback from the moviegoers.

The latest update is that the complete audio album of the film will be released today at 5 pm. Touted as a feel good love entertainer Ninnu Kori has Nivetha Thomas as the female lead and Adhi Pinnisetty will be seen in a prominent role.

Debutant Shiva Nirvana has directed this movie and DVV Danayya has produced it. Gopi Sunder has scored the music for this romantic entertainer.