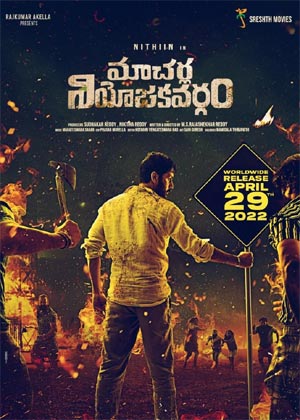 Nithiin is currently working on an intense rural political drama, titled Macherla Niyojakavargam. Also starring Krithi Shetty as the female lead, the film’s shooting is underway in full swing. The makers have just announced that the film will be releasing on April 29 next year as a summer holiday treat.

In Macherla Niyojakavargam, Nithiin plays a mass and action-packed role. The film is being directed by MS Raja Shekhar Reddy and produced by Nithiin’s father Sudhakar Reddy and sister Nikitha Reddy on Sreshth Movies in association with Aditya Movies & Entertainments banners. Mahathi Swara Sagar is collaborating with Nithiin for the third time, after Bheeshma and Maestro.