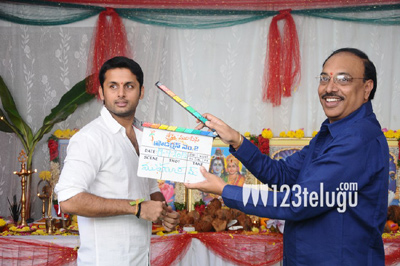 As we have earlier reported that Nitin would once again share screen space with Nitya Menon, latest update is that the film kick started it’s pooja formalities on the auspicious occasion of Vinayaka Chavithi today. The Mahurat shot was filmed on Nitin, and regular shooting will start from September 20 in Hyderabad. Shrestha movies who made ‘Ishq’ with Nitin are producing this film. Sakshi Talwar plays the other female lead in this romantic family entertainer. This yet untitled film is directed by Vijay Kumar Konda and has music by Anoop Rubens.