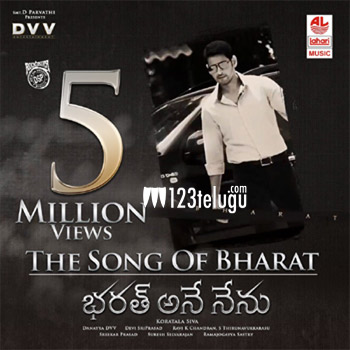 Looks like the first song from Bharath Ane Nenu, the song of Bharath is no mood to slow down. The song has become a rage all over the Telugu states and the latest we hear is that it has clocked five million digital views.

DSP’s emotional composition and the intensity of the song has won a lot of appreciation all over. Fans are super happy and this has made the buzz for the audio launch even bigger.

Koratala Shiva directs this film which has Kiara Advani as the female lead. The film is up for a release this 20th of April.