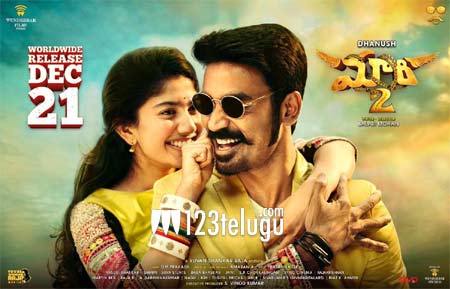 21st of December is packed with releases in the form of Antariksham, Padi Padi Leche Manasu, and KGF. All the three films have been promoted well and KGF is the weakest among the three as it is a dubbed film.

Apart from all this, there is Dhanush’s Maari 2 which will also hit the screens tomorrow. There is absolutely no buzz for this film as the makers did not conduct any promotions in the Telugu states.

Even Sai Pallavi’s presence has not made any difference to the buzz created for this film. Many are not even aware that a big hero film is even coming out tomorrow.

Maari 2 is the sequel of the hit film Maari and is directed by Balaji Mohan. Unless and until it gets a positive word of mouth, things look quite bleak for this film which is a full-on mass entertainer.