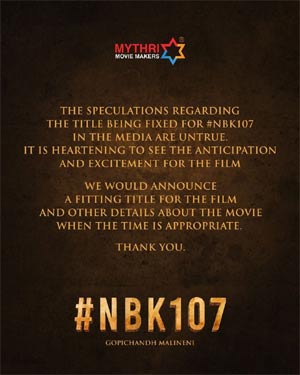 It is a known fact that Nandamuri Balakrishna will be doing a film in the direction of Gopichand Malineni. The film was announced a few months back and will start its shoot soon.

Now, the media is abuzz with the news that the film has been titled Rowdyism. But we have come to know from sources that the film’s title is not Rowdyism as the star hero is yet to lock the title.

Generally, Balayya takes two to three options and decides on one. The film will be a cop drama and will showcase Balayya in a new manner after a long time. The name of the heroine will also be announced soon as per the news.