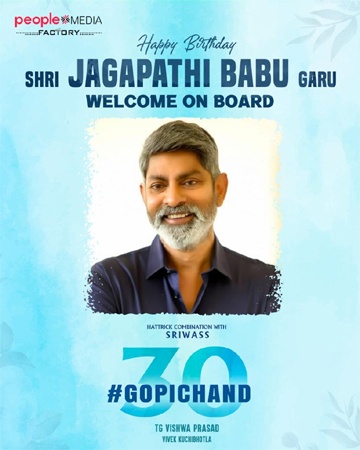 Macho hero Gopichand and director Sriwass delivered two blockbusters with Lakshyam and Loukyam. The actor-director duo is all set to team up for the third time now.

The news now is that none other than Jagapathi Babu has joined the film. He will be seen in a crucial role in this film. The announcement was made today on the occasion of JB’s birthday.

Gopichand30 had its grand launching ceremony on the 24th of this month in Hyderabad. The film will have a Kolkata backdrop.

TG Viswa Prasad will produce the film on People Media Factory and Vivek Kuchibotla is the co-producer.