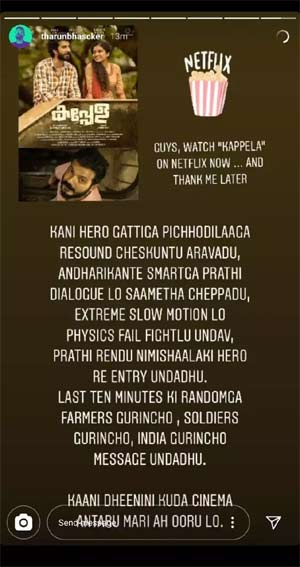 A few days back, noted director Tharun Bhacker of Pelli Choopulu fame watched the Malayalam film Kappela and spoke high about it on his Insta story.

The director put a lengthy post lauding the film in such a way by saying that hero in the film does not shout, has no mass appeal and there is no unnecessary fasad with his action in the film.

One can clearly understand that Tharun’s post was to all the films in the south who have this unnecessary Hungama. But looks like it did not go well with many and they have been trolling him big time on social media from the last few days.

Looks like Tharun has decided to have enough of it and even approached cybercrime officials to take strict action against these trollers.