Ever since the tragic passing of Bollywood star Sushant Singh Rajput, Bollywood actress Kangana Ranaut has been taking on several actors and filmmakers. In a latest interview with a national news channel, Kangana once again called out Alia Bhatt and other star kids who are thriving in the industry thanks to nepotism. Kangana also called Alia Bhatt’s celebrated musical hit, Gully Boy, a ‘mediocre film’.

It looks like Alia has had enough of Kangana’s taunts. The RRR actress took to Instagram and posted a sly comment earlier today. “The truth is the truth, even if no one believes it. A lie is a lie even if everyone believes it,” Alia’s post read. Yesterday, Alia also posted, “Silence says a lot more than you think.” Only time will tell when and where this mudslinging will end. 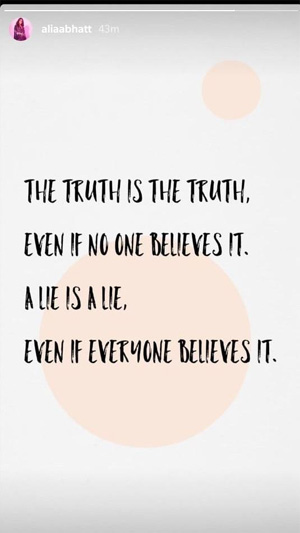