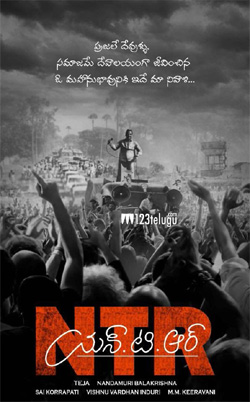 It’s well-known that Nandamuri Balakrishna’s next project is going to be a biopic on his father – legendary actor and Chief Minister of erstwhile Andhra Pradesh NT Ramarao. Titled NTR, this much-awaited period drama will resume from August, after Balayya recuperates from the shoulder surgery.

Now, the latest reports reveal that a whopping 60 crores are being invested on the making of NTR. This makes NTR the most expensive film in Balakrishna’s career so far, surpassing his 100th project, Gautamiputra Satakarni.

Currently, the film’s pre-production work is going on in full swing. A team of Hollywood experts has been employed to come up with 72 character sketches. Balayya will be sporting more than 20 getups that showcase NT Ramarao in various time periods.

Balakrishna, Sai Korrapati and Vishnu Induri are bankrolling this prestigious project and Teja is directing it. Stay tuned for more updates.