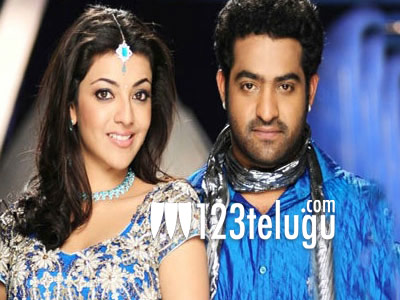 NTR and Kajal will soon be seen in Sreenu Vaitla’s upcoming film titled Baadshah. The film was recently shot in Barcelona where a song was canned on NTR and Kajal. Incidentally, they met the film unit of Puri Jagannadh’s Iddarammayilatho which was also being shot in the same city. Now, the entire unit of Baadshah has shifted to Switzerland where another song is going to be shot for the next few days.

“It was wonderful bumping into Puri sir, Bunny and their film unit in Spain. I just wrapped up one song with my Baadshah team. Now in Switzerland! Freezing in the snow!” Kajal posted on her social networking page. Bandla Ganesh is producing the film. NTR’s role has two different shades and the entire unit is confident that they have a winner in their hands. Kona Venkat and Gopi Mohan have written the script along with Sreenu Vaitla. Thaman has scored the music and the audio will be launched on March 10. Baadshah will hit the screens on April 5.