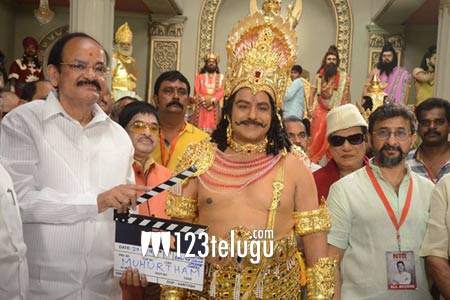 The moment which everyone was waiting for is finally here as the much-anticipated biopic of NTR was finally launched today. The vice-president of India, Venkaih Naidu was the chief guest of the event which was attended by some of the big wigs in the industry.

Balayya was seen as a king in the first shot and some scenes related to his darbar were shot. Speaking at the event, an emotional Balayya said that today is the proudest moment in his life as he is acting in the biopic of his dad.

He also said that NTR is a phenomenon and not many can achieve what his dad has in his career. Teja directs this film which will have some of the known stars in the industry.

The details of the regular shoot and other technicians will be revealed soon.