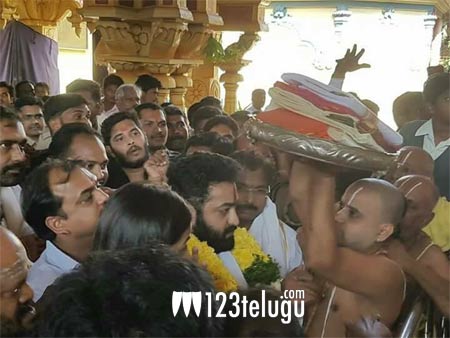 Janatha Garage duo NTR and director Koratala Siva offered special prayers at the Bhadrachalam Sri Sita Ramachandraswamy temple at 9 AM today. NTR and Koratala Siva, who were dressed in traditional attire, were accompanied by their wives Lakshmi Pranathi and Aravinda respectively.

Both the star couples offered prayers for 45 minutes and later left for NTR Fan’s association President Talluri Ramesh’s residence for breakfast, before returning to Hyderabad at around 11:30 AM.

NTR’s visit to Bhadrachalam coincides with his late grandfather and legendary actor and political leader NT Ramarao’s visit along with his wife Basavatarakam exactly 3 decades ago. Incidentally, NTR made his acting debut in a Lord Sri Rama’s role in Balaramayanam.