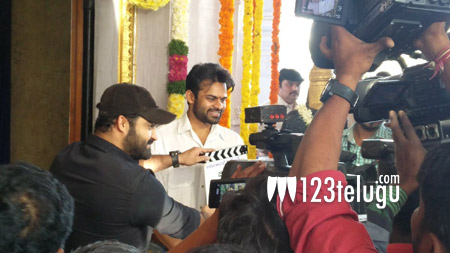 Young Tiger NTR was the guest of honor at the inaugural ceremony of Sai Dharam Tej’s next movie in writer turned director BVS Ravi’s direction. The muhurtham ceremony took place at Film Nagar Temple this morning and NTR kicked off the shoot by sounding the first clap.

Titled Jawan, this film is going to be an out and out entertainer. Punjabi beauty Mehreen will be romancing Sai and director Harish Shankar is producing this movie along with Krishna. This is SS Thaman’s third movie with Sai and he is hoping to score a hat-trick.