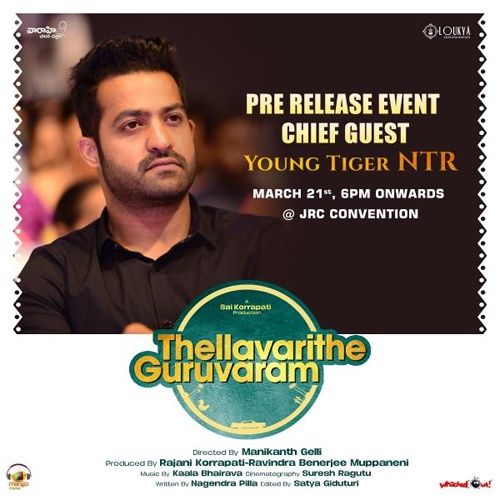 The makers of young hero Sri Simha’s upcoming romantic entertainer, Thellavarithe Guruvaram, announced that star hero NTR will be the chief guest at their film’s pre-release event. The event will be held on March 21 at JRC Convention Centre in Hyderabad.

NTR shares a close rapport with Sri Simha’s father and veteran music composer MM Keeravani. In fact, Sri Simha and his elder brother Kaala Bhairava are huge admirers of the Young Tiger. It’s owing to this friendly bond that Tarak gave his nod to participate in the event.

Thellavarithe Guruvaram has young beauties Chitra Shukla and Misha Narang as the female leads. Debutant Manikanth Gelli is the director and Rajani Korrapati and Ravindra Benerjee Muppaneni are the producers. Noted producer Sai Korrapati is presenting the movie. The film is scheduled for release on March 27.