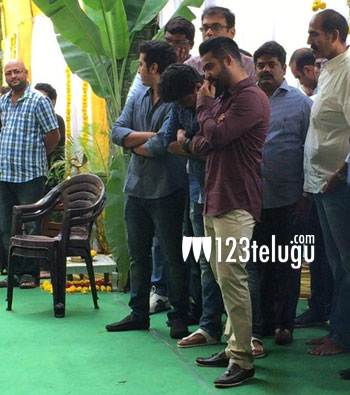 Young Tiger NTR’s next film in the direction of Koratala Siva has been launched in a grand traditional manner this morning with a formal puja ceremony in Hyderabad. NTR’s wife Pranathi and son Abhay Ram were also present during the ceremony. The film will be produced by Mythri Movie Makers, their second prestigious project after the blockbuster Srimanthudu.

the film is said to be a wholesome family entertainer and it is tentatively titled as Janatha Garage, with the tagline Anni Repair Cheyabadunu. However, an official confirmation is awaited from the makers regarding the title. The makers are reportedly in talks with Amyra Dastur to play the female lead’s role. Fans are highly thrilled with the NTR-Koratala Siva combination materializing finally.