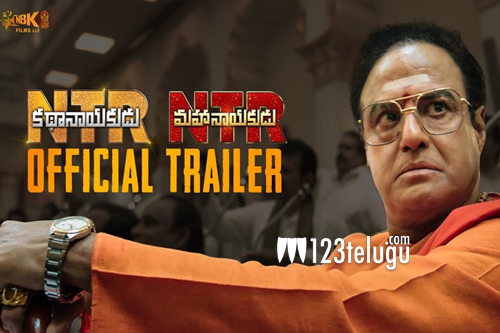 The much-awaited trailer which everyone was waiting for is finally here. Balakrishna has arrived as NTR and the trailer showcases the journey as NTR right from his college days to forming his TDP party.

The trailer is over three minutes long and reveals NTR as the messiah of the crowds. Right from the acting days of NTR to his wedding with Basavatarakam, everything is revealed nicely.

Vidya Balan is top notch as Basavatarakam, and Balayya looks surreal as NTR in those different getups shown in the trailer. Balakrishna has got the dication and body language right and shows what he can do as an actor with his screen presence as NTR.

The background score by Krish, dialogues by Sai Madhav Burra and the makeup done instantly remind you of NTR and his greatness. The trailer has only been focused on Balayya and Vidya Balan and there is no sight of other actors like Kalyan Ram in the trailer.

Krish has shown Balayya in a way which his fans want and this 9th of January will be even bigger as Balayya will be coming as the mighty NTR.