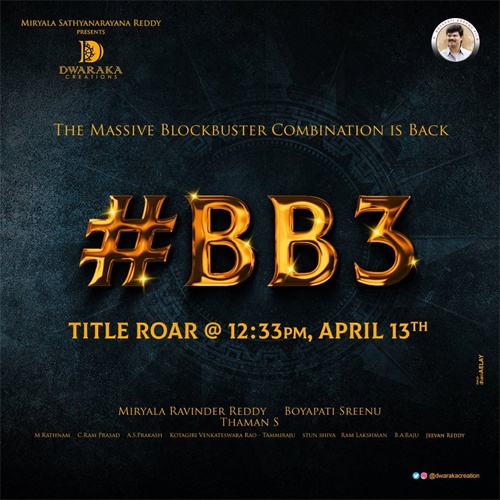 It’s official now. Confirming the ongoing buzz, the makers of Balakrishna and Boyapati Srinu’s much-awaited action entertainer have just announced that the film’s title will be out on April 13 at 12:33 PM, on the auspicious Ugadi festive day. The makers released a special Title Roar poster to announce the same.

Even though the formal announcement will be made in a few days, the buzz has it that BB3 has been titled Godfather. Balayya will be seen in dual roles in this high budget entertainer. Pragya Jaiswal and Poorna will be seen as the female leads in this Miriyala Ravinder Reddy production. The man in form Thaman is scoring the soundtrack. BB3 is scheduled for a May 28th release.