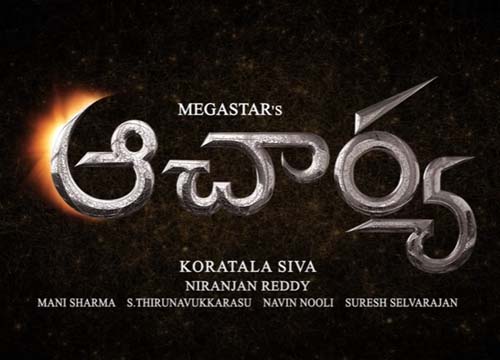 It’s official finally. Confirming the ongoing speculations, the makers of Megastar Chiranjeevi’s highly-anticipated social drama, Acharya, today announced that the film will not be released on May 13 as scheduled earlier. “Keeping in view of the pandemic situation, #Acharya movie will not be releasing on May 13,” a tweet from Konidela Productions’ Twitter handle read.

The tweet further stated that Acharya’s new release date will be announced once the situation becomes normal and urged all the fans to wear mask, stay home and stay safe. Even though the makers are tight-lipped about the film’s release plans, the latest buzz in Tollywood circles reveals that the film may be hitting screens in August.

Acharya is extra special for its makers and Mega fans, especially since it also has Ram Charan sharing screen space with his father Chiru once again. The father and son will be seen as Maoists in this Koratala Siva directorial. Acharya also features Kajal Aggarwal and Pooja Hegde as the female leads. Ram Charan and Niranjan Reddy are producing the movie. Manisharma is composing the soundtrack.

Keeping in view of the pandemic situation, #Acharya movie will not be releasing on May 13.

New Release date will be announced once the situation becomes normal.