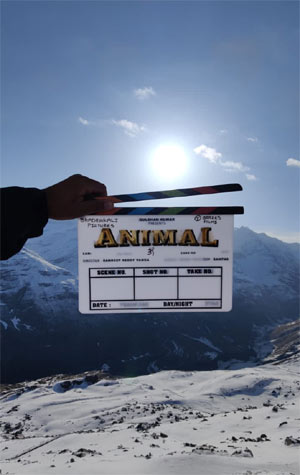 Tollywood director Sandeep Reddy Vanga needs no special introduction. He created a sensation with his maiden directorial ventures, Arjun Reddy and Kabir Singh in Tollywood and Bollywood, respectively. Later, he announced his Hindi movie with Bollywood star Ranbir Kapoor to offer something much bigger.

Announced back in January 2021, the movie has finally commenced its regular shoot today in the Himalayas. Billed to be an action entertainer, the movie has been launched with a formal pooja ceremony.

‘National Crush’ Rasmika Mandanna is playing the female lead in this flick. Produced by Bhushan Kumar and Pranav Reddy Vanga under T Series and Bhadrakali Pictures, the movie will showcase Ranbir Kapoor in a completely different role.

Animal is a Pan-India project to be released in all south Indian languages and Hindi. The crazy movie will have some prominent actors in important roles. Top-notch technicians will handle different crafts of the movie which will release in cinemas on August 11, 2023.