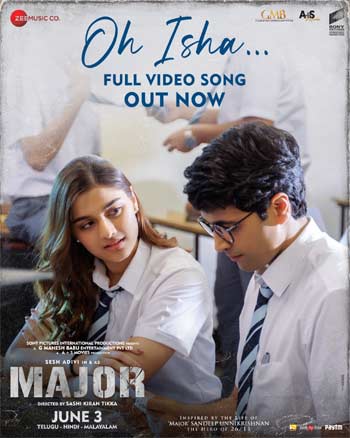 Adivi Sesh is ready with his new film Major that will release soon. The promotions of the film are happening at a brisk pace as of now.

Today, the makers revealed a romantic song named Oh Isha. The song has been composed by Sricharan Pakala and is a soft melody.

The visuals are romantic as the school and college life of Major Unnikrishnan is showcased. Saiee Manjrekar plays the female lead and looks cute in the school uniform.

The song is filled with cute scenes and is shot quite well. Sashi Kiran Thikka directs this film which will have a pan India release on June 3rd.