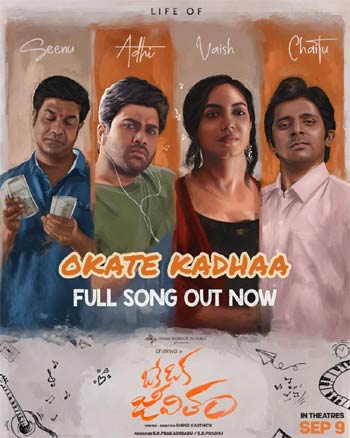 As part of musical promotions, the lyrical video of Okate Kadhaa song has been released. The song talks about the protagonist’s not-so-happening life. He has doubts whether he will ever meet his soulmate. Krishna Kanth penned meaningful lyrics for the song which is perfectly complimented by Jakes Bejoy’s music. The composition is lively, and so are the vocals of Gowtham Bharadwaj.

The film’s teaser received a tremendous response, and Amma’s song has been received well. Oke Oka Jeevitham is billed to be a sci-fi family entertainer. The film also stars Amala Akkineni playing Sharwanand’s mother, and Ritu Varma as his love interest. Tharun Bhascker has penned dialogues for the film that was shot as a Telugu and Tamil bilingual. The film will have a simultaneous release in Tamil as ‘Kanam’.