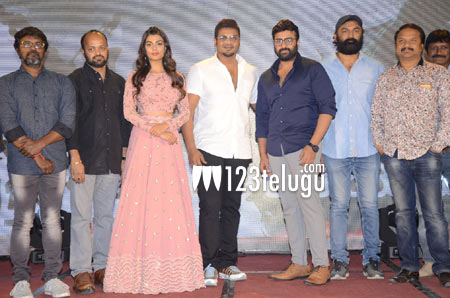 The pre-release event of Manchu Manoj’s upcoming film based on the LTTE ethnic conflict, Okkadu Migiladu, took place last night. Speaking on the occasion, Manoj, who will be seen playing dual roles as LTTE Chief Velupillai Prabhakaran in Sri Lanka and a college student in India, said Okkadu Migiladu is not just about the Sri Lankan civil war, but it showcases a universal issue.

Manoj went on to add that the film’s director Ajay Andrews Nuthakki had penned the film’s story after he was deeply moved by the heartbreaking photograph of the Syrian refugee boy who was washed ashore after a boat capsized. The passionate actor further said that Okkadu Migiladu features the painful struggles of the Sri Lankan refugees in a realistic manner, and urged everyone to experience the emotional drama.

Okkadu Migiladu is going to release on November 10. The film stars Anisha Ambrose as the female lead. SN Reddy and Lakshmikanth have jointly produced the movie.