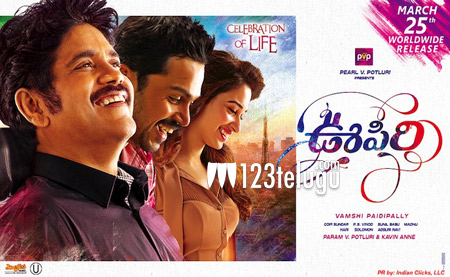 As expected, Nagarjuna’s Oopiri opened to a thumping response all over. Right from the time the project was launched, it was carrying a huge buzz all over. Staying true to all the hype and hysteria, the film opened exceptionally well both in India and overseas.

Trade reports reveal that the collections are super strong in both the multiplexes and single screens. Even the reports coming in from US premiers is pretty decent and talk is that the film will easily cross the 1 million mark.

With the weekend setting in and no other big film coming in the next two weeks, the film is said to collect good figures at the box office. Nagarjuna’s moving performance and Karthi’s lovable character have gone well with the audience big time.

Directed by Vamsi Paidipalli, Oopiri is produced by PVP cinema and has music by Gopi Sunder.