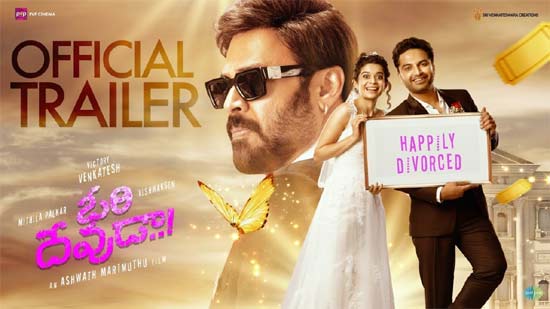 Vishwaksen, who enjoys a good following among the masses, is coming up with a fantasy drama Ori Devuda. The film is scheduled for a grand release for Diwali on 21st October. The film’s trailer was launched today and is pretty much delightful and amusing.

The film is about two friends, Arjun Durgaraju and Anu Paulraj, who get married in unusual circumstances. The problems arise once Arjun starts an affair with his school crush. Victory Venkatesh played a cameo in the god role, who provides a solution to Arjun’s problem.

The veteran actor is elegant to watch in this entertaining role, and his comedy timing leaves an impact in the trailer. His styling, too, looks pretty good. The whole trailer promises a non-stop entertainer ahead and gives the film a much-needed push. Also, director Puri Jagannadh was seen in the theatrical trailer.

The film is an official remake of the Tamil superhit Oh My Kadavule. Mithila Parkar is the female lead in this film, directed by Aswath Narimuthu, who also helmed the Tamil version. Asha Bhat plays a vital role, and it is produced together by PVP Cinema and Sri Venkateswara Creations.