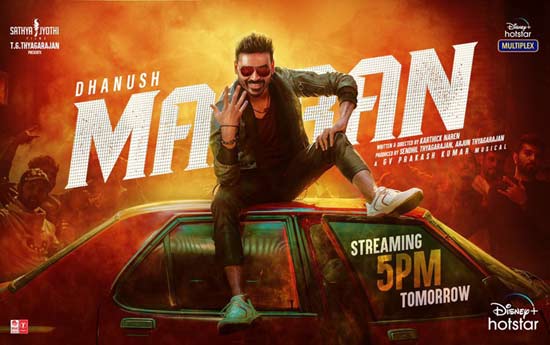 Kollywood star actor Dhanush-starrer Maaran has opted for a direct digital release. The movie will be released on the popular OTT platform, Disney Plus Hotstar tomorrow. Now, a new update on the movie has been revealed by the OTT giant.

Usually, OTT platforms make movies available for streaming at 12 AM. But, Disney Plus Hotstar has changed it in the case of Maaran. The OTT platform confirmed that Maaran will be available to stream from 5 PM onwards tomorrow.

Malavika Mohanan played the female lead in this political action thriller. Written and directed by Karthick Naren, the movie will be released in Tamil, Telugu, Kannada and Malayalam. GV Prakash Kumar has scored the music for this movie.