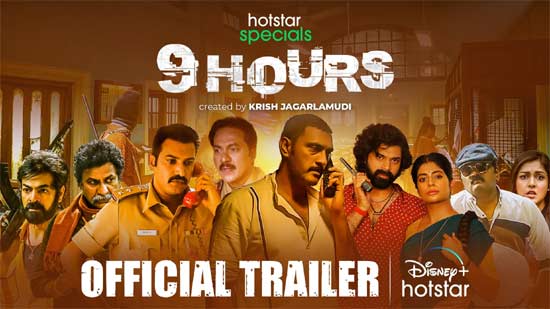 Tollywood director Krish Jagarlamudi’s web series 9 Hours trailer has been officially released by Varun Tej today. Helmed by Niranjan Kaushik and Jacob Verghese, the series will be out on June 2, 2022, on Disney Plus Hotstar.

The trailer looks promising. Going by the trailer, it is confirmed that the series is all about three prisoners who escape from prison to execute a major bank robbery. But the twist in the tale is they have to return before the next roll call, which means in 9 hours. What happens when they land in the bank? How do the police get involved? How many hostages become their victims? These answers will all be in the story.

Nandamuri Taraka Ratna, Ajay, Madhu Shalini, Ravi Varma, Ankith, Preethi Asrani and others are playing pivotal roles in this series. Produced by Rajeev Reddy and Saibabu Jagarlamudi, the series will be released in Telugu, Tamil, Malayalam, Kannada and Hindi.