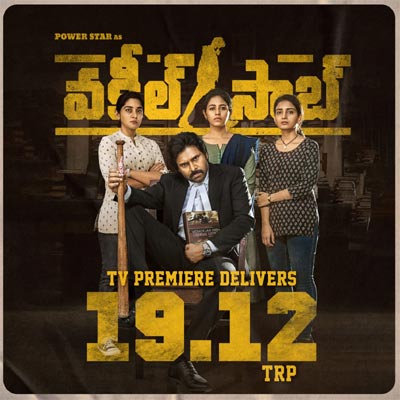 Vakeel Saab was a big hit at the box office just before the second wave started. The film directed by Sriram Venu was telecast on TV a few days back making fans very happy.

The latest update is that the has garnered a massive 19.1 Television viewership rating in Andhra Pradesh and Telangana. This is huge and shows the power of Pawan Kalyan in the masses.

The update is also that Vakeel Saab is second-best among Pawan Kalyan’s movies after ‘Attarintiki Daaredhi’. As of now, Pawan Kalyan is busy with the shooting of his new film with Rana. The shoot is on in Hyderabad as of now.