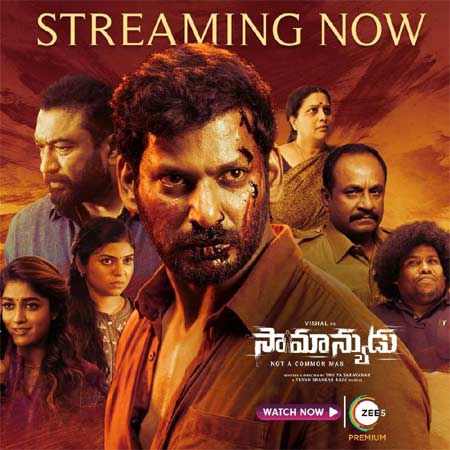 Kollywood actor Vishal’s Saamanyudu, which is titled ‘Veeramae Vaagai Soodum’ in Tamil, started to be streamed on ZEE5 from March 4. Besides Telugu and Tamil versions, the Kannada version of the action drama has also been streaming on the platform.

The popular South Indian hero has given a terrific performance in the movie, directed by the debutant director Thu Pa Saravanan. Co-starring Dimple Hayathi, Raveena Ravi, Yogi Babu, and Ramana in other roles, the film, on the back of its content and stellar performances, was well received by the audience.

Owing to the audiences’ interest, it received an encouraging response from the audience when it was released in theatres. With ZEE5 doing a world digital premiere, viewers who may have missed watching it on the big screen get to enjoy the experience again in the comfort of their homes or on the go.