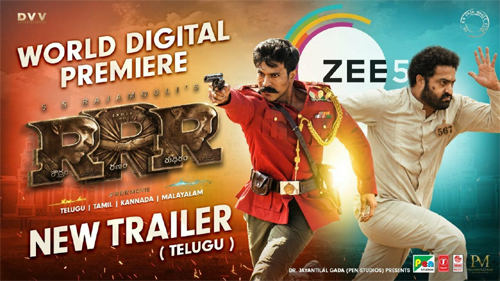 RRR, the magnum opus directed by SS Rajamouli, is all set to make its digital debut on the OTT platform, ZEE5. Starring Jr NTR and Ram Charan, the biggie has MM Keeravaani’s music.

ZEE5 has released a brand new trailer to announce the arrival of the movie on its platform. The well-cut trailer, released today, has showcased some extraordinary shots from the movie. RRR will be out on the digital platform in all major South Indian languages on May 20, 2022.

Bollywood actors Ajay Devgn and Alia Bhatt played significant roles in the movie, which also has Olivia Morris, Samuthirakani, Shriya Saran and others. Produced by DVV Entertainment, the movie has collected more than Rs. 1000 crores gross at the global box office.