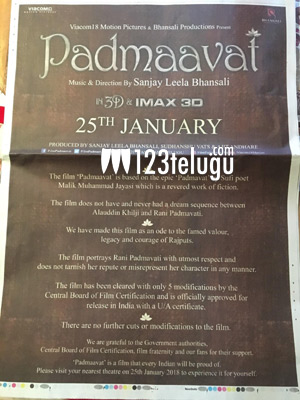 It looks like Sanjay Leela Bhansali’s troubles to release his latest film Padmavat aren’t going to end anytime soon. Despite being cleared by CBFC with U/A certificate, the film is expected to banned in few states in North India.

Now, a latest newspaper ad of the film, which viral on social media, has once again highlighted the problems that the movie team is facing. Everyone who saw the ad have expressed their views on how demeaning it is for a creator to have to pacify certain fringe groups and call for peace to just let the film release without any issues.

The film is going to release in 3D, IMAX 3D on January 25, and it remains to be seen how the film is going to fare at the box-office. Deepika Padukone, Ranveer Singh, and Shahid Kapoor have played the lead roles in this period drama.