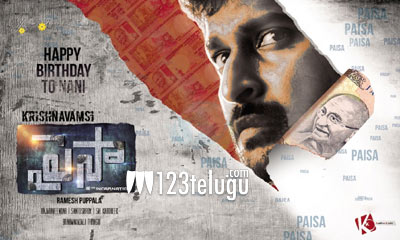 Nani’s upcoming film Paisa is fast gearing up for a Summer release. Krishna Vamsi has directed the film and it also stars Catherine Tresa and Sidhika in lead roles. Ramesh Puppala has produced the film under Yellow Flowers banner. The film’s shooting is nearly complete, except for little patch work. Buzz is that the film’s audio might be launched on April 11, as a Ugadi special.

Nani is playing a role named Pra’Cash’ and he’s obsessed with money and on the other hand Catherine Tresa is a muslim girl named Noor. Majority of the film has been shot in and around Hyderabad and few songs were shot in Dubai and Malaysia. Sai Karthik has scored the music. The film is said to be a hard hitting political drama which is based on the theme that money has become so important in our lives that human values are no longer considered to be important. After Yeto Vellopoyindhi Manasu, this is Nani’s first big ticket film this year and he’ll also be seen in Samuthirakani’s Jenda Pai Kapiraju and the remake of Band Baaja Baarat will go on floors shortly.