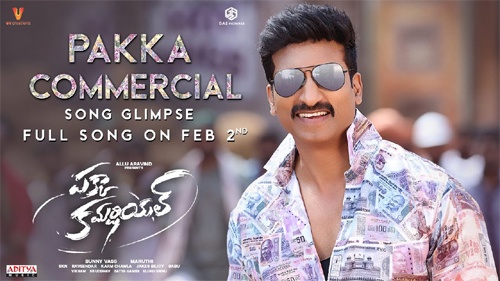 After delivering a hit movie, Manchi Rojulochaie, young and successful director Maruthi is now coming up with Pakka Commercial. Telugu actor, Gopichand is playing the lead in this movie.

Today, the makers have unveiled the promo of the title song. Composed by Jakes Bejoy, the glimpse looks intriguing. Gopichand wears a shirt with the imprints of currency notes. It seems that the full song, which will be released on February 2 at 4 PM, will become an instant hit.

Late legend Sirivennela Seetharama Sastry garu penned the lyrics of this Pakka Commercial song. Sung by Jakes Bejoy and Hema Chandra, the song will rule the charts for sure.

Raashii Khanna is playing the female lead in this movie. Produced by UV Creations and GA2 Pictures, the movie is being presented by the ace producer Allu Aravind.