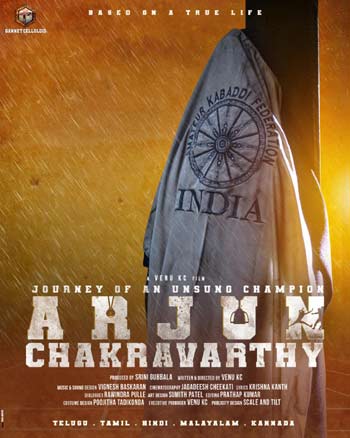 Yet another sports drama based on Kabaddi is coming out from Tollywood. The makers of Arjun Chakravarty, a hard-hitting and emotional period film based on a true story, today announced that the film will have a pan-India release. Today marks World Kabaddi Day and the makers unveiled Arjun Chakravarty’s intense glimpse.

Nearly 75 percent of Arjun Chakravarty’s shoot has been wrapped up in over 125 locations across India, including Andhra Pradesh, Telangana and Jammu and Kashmir. The film is a rural drama set in the time period between 1960 to 1980.

Arjun Chakravarty features debutants Vijaya Rama Raju and Sija Rose in lead roles. The film is being directed by Venu KC and produced by Srini Gubbala under Gannet Celluloid banner. The film is simultaneously shot in Telugu and Tamil and it will be dubbed in Malayalam, Kannada and Hindi.