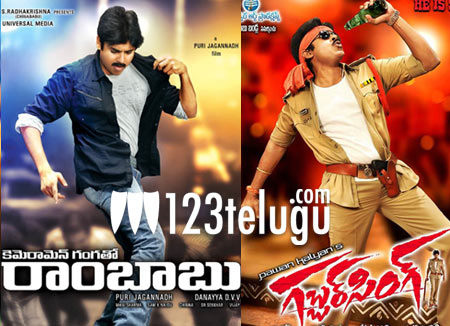 After today’s CMGR censor screening and the unanimously positive reports coming out from the industry over it, the question on everyone’s mind is this – Will Rambabu overtake Gabbar Singh? Power Star Pawan Kalyan scored a massive hit this year in the form of ‘Gabbar Singh’, a movie that went on to become one of the highest grossers of Telugu Film Industry.

Now less than 6 months after that film released, ‘Cameraman Ganga tho Rambabu’ is getting ready to hit the screens on October 18th. The production team is now so confident about a blockbuster that Puri Jagan publicly tweeted “Naa dhammento 18th na prove chesta. Fans ga mee dhammento collections tho prove cheyandi”.

Fans are extremely happy over the highly positive buzz surrounding the movie. With the lucrative Dussehra season ahead of the movie’s release and a massive release, the movie is on track to set new Box Office records for sure. And if Rambabu does manage to beat Gabbar Singh, Pawan Kalyan will be one very happy man this year.