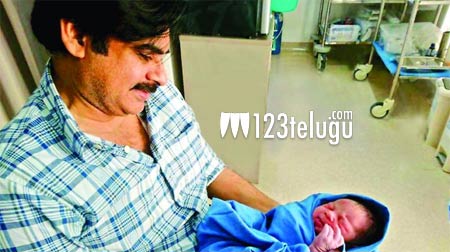 We had earlier reported that Pawan Kalyan and his wife Anna were blessed with a baby boy on October 11. And as per the latest news, the couple have chosen a name for the baby boy.

If reports are to be believed, the couple has named their son as Mark Shankar Pawanovich. Interestingly, Chiranjeevi’s original name is Shiva Shankar Varaprasad, and close associates of Pawan Kalyan say that it was the actor’s way of showing his affection towards his elder brother.

Currently, Pawan Kalyan is busy with the shoot of his upcoming film in Trivikram’s direction. He is expected to address students in London later this month as a part of his campaign to create awareness about the socio-political scenario in the two Telugu speaking states.