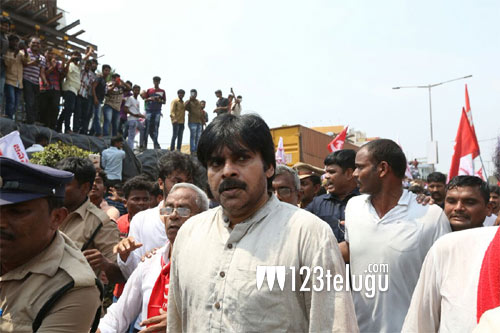 For the last few weeks, film star and Janasena President Pawan Kalyan has been quite vocal about the centre’s betrayal to Andhra Pradesh in according Andhra Pradesh the promised special status. Today kick-started his 1-day Padayatra in Vijayawada.

The actor-turned-politician began his walkathon after paying tributes to Ambedkar’s statue near the Thummalapalli Kalakshetram. Pawan flagged off his yatra from Benz Circle and walked for 3 kilometers till the Ramavarappadu Junction. Several key leaders of the Communist Parties joined Pawan in his Padayatra apart from thousands of enthusiastic fans who thronged to see their favorite star.