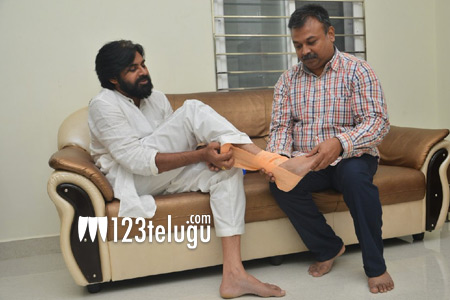 Powerstar Pawan Kalyan, who resumed his tour across Andhra Pradesh, sprained his ankle during his ongoing Jana Sena Porata yatra in West Godavari district earlier today. The incident occurred when Pawan Kalyan was about to meet several Jana Sena party workers and students at ND Functional hall in Bhimavaram.

Despite the agonising pain, he met several people at the venue; however, the doctors advised him to take some rest before he resumes his tour. Several pictures of Pawan Kalyan, while he was being treated by the doctors, have gone viral on social media.

For the past few months, Pawan Kalyan had been touring across several districts in Andhra Pradesh tirelessly to talk about public issues and also question the actions of the government. It remains to be seen if this minor mishap forces him to delay the tour for the time being.