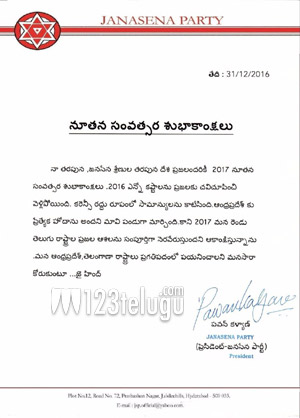 Power Star Pawan Kalyan wished the people of India a happy new year on his and the Jana Sena Party cadres’ behalf. Pawan said that 2016 was a tumultuous year due to currency ban.

Tomorrow, Pawan will head to Uttarandhra for a whirlwind tour in which he will take on the state and central governments for their failures in keeping their poll promises.