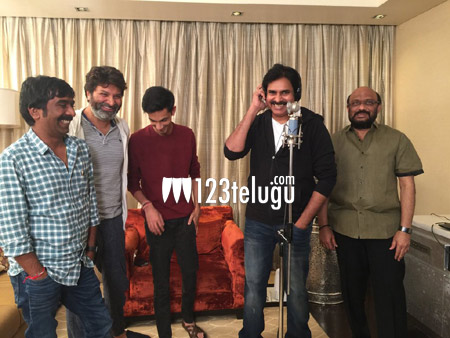 ‘Katamarayuda Kadiri Narasimhuda’ song crooned by Power Star Pawan Kalyan in Trivikram’s Atharintiki Dharedi was a rage among fans and music lovers in 2013. Now, the Power Star is all set to repeat the same euphoria with his upcoming song ‘Kodaka Koteswara Rao’ in Agnyaathavaasi.

Pawan recorded Kodaka Koteswara Rao last night in music composer Anirudh Ravichander’s supervision. As per the sources, Pawan has rocked the song like a pro and he is sure to burn the house down with his energetic rendition yet again.

This highly-anticipated special number will be unveiled on the New Year’s Eve. Popular lyricist Bhaskarabhatla has penned this song. Agnyaathavaasi, a Trivikram directorial, stars Keerthy Suresh and Anu Emmanuel as the female leads. S Radhakrishna has produced the movie. The film is slated to hit the screens on January 10.