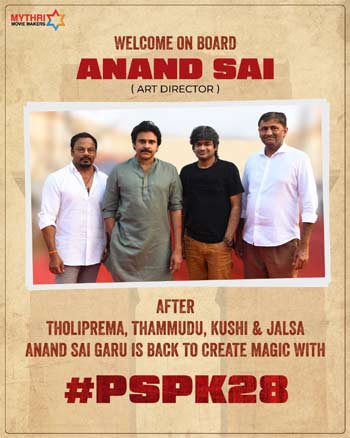 This update on Pawan Kalyan’s much-awaited film under Harish Shankar’s direction will be cherished by all the fans. Senior art director and Pawan’s longtime friend Anand Sai has joined this crazy project. This is the 5th time that Pawan and Anand Sai are collaborating, after Tholi Prema, Thammudu, Khushi and Jalsa.

Anand Sai is returning to movies after 5 years of dedicating his time as the Chief Architect of the Pride of Telangana – Yadadri Sree Lakshmi Narasimha Swamy Temple. Interestingly, both his debut film (Tholi Prema) and comeback film (PSPK28) are with Pawan Kalyan. Pawan, along with Harish Shankar and producer Naveen Yerneni, personally welcomed Anand Sai on board.

PSPK28 will be produced under Mythri Movie Makers banner. Devi Sri Prasad will be composing the soundtrack and Bollywood cinematographer Ayanaka Bose will be cranking the camera. The film’s regular shoot will kick-start this summer, after Pawan wraps up Ayyappanum Koshiyum’s remake.