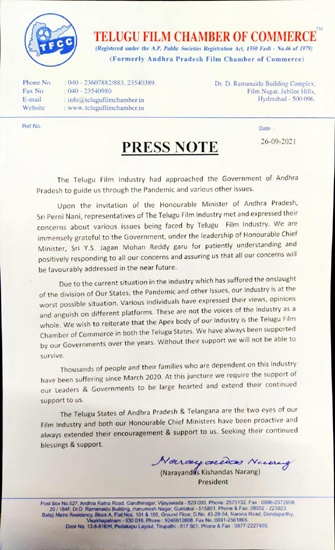 Last night, in his speech at Republic’s pre-release event, actor-politician Pawan Kalyan lashed out at Tollywood bigwigs and the Andhra Pradesh government over the resolved issues that have been plaguing Telugu film industry. Today, the Telugu Film Chamber issued a press note to thank the governments and chief ministers of Andhra Pradesh and Telangana for their co-operation.

Interestingly, Film Chamber’s letter indirectly gave a counter to Pawan Kalyan. “Various individuals have expressed their views, opinions
and anguish on different platforms. These are not the voices of the Industry as a whole. We have always been supported by our Governments over the years. Without their support we will not be able to survive,” the chamber wrote.

The letter also said that “the Telugu States of Andhra Pradesh and Telangana are the two eyes of our film industry and both the Chief Ministers have been proactive and always extended their encouragement and support.”