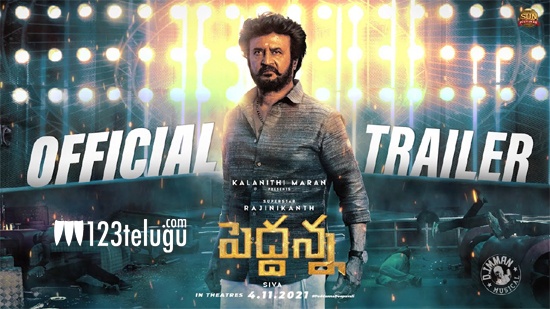 The highly-anticipated theatrical trailer for Kollywood Super Star Rajinikanth’s soon-to-release Diwali festive biggie, Peddanna, has been launched just a while ago. In the movie, Rajini plays a Panchayat officer in Razole village. The trailer is loaded with comedy, punch dialogues and mass masala entertainment one expects in a Rajini-starrer.

Peddanna’s trailer assures a wholesome festival treat in cinemas this Diwali. Going by the trailer, the film seems to be high on family emotions and intense action drama between Rajini and the film’s antagonists, Prakash Raj, Jagapathi Babu and Abhimanyu Singh. The Kolkata backdrop raises curiosity about the film’s story.

Nayanthara plays Rajini’s love interest, while Keerthy Suresh will be seen as Thalaivar’s sister in the movie. Soori, Meena and Khushboo also portrayed key roles. Directed by Siva, the film is being presented by Narayan Das Narang and Suresh Babu. Peddanna is gearing up for its grand worldwide release on November 4.